German Hanger for Sale Washington DC United States. Based on the same technology applied to the modular shelter, Aluminium Tents provide large-span aircraft hangars of superior performances to hangars made of concrete, while adding the economic advantage of tension fabric structures. These hangars are primarily used for the storage of medium to large civilian or military aircraft maintenance facilities, or as general purpose hangars. The large-span aircraft hangars are designed to be extremely durable with a lifespan in excess of 25 years. With frames constructed of hot-dip galvanized steel tubing and covers made of high strength pre-stressed, flame retardant PVC coated polyester fabric, these structures are built to last. These hangars, with spans ranging from 28 meters to 85 meters are rated and tested to handle the most extreme wind and snow loads. 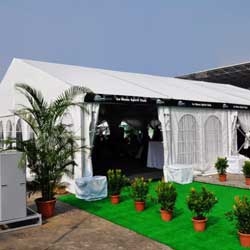 German Hanger Manufacturers Washington DC United States. The large-span hangars are completely sealed off from rain, dust, and moisture, providing for a temperature and humidity controlled environment allowing. As a result, this greatly reduces the effect of corrosion on aircraft or other equipment stored within the shelter.